To travel into the unknown of space is a dream for so many children and adults alike, although one that very few will ever reach.

Throughout time so many countries, and now private companies, across the world have tried to create a method of getting in amongst the stars.

It’s even united countries that previously had such strong conflict.

Here we’re going to go through a timeline of the significant moments in the history of space travel, starting way back in the 1940s.

Also known as the boundary of space.

Braun later worked with NASA on the rockets that went to the moon.

Fruit flies were used to study the effects of space travel on animals as they’re very similar to humans.

The flies traveled with a supply of corn to eat on the flight.

Albert II was the first monkey in space.

Albert II was a Rhesus monkey and boldly went where no primate had been before on the 14th June 1949 in a specially adapted US V2 rocket, that flew 83 miles from Earth.

Sputnik 1 was the first satellite in orbit around the earth.

In November the same year, Laika the Russian dog became the first animal to orbit the earth. Laika is Russian for “Barker”.

She traveled in Sputnik 2 and helped understand whether people could survive in space.

By 1959 Both US and Russian scientists were in a race to get a craft to the Moon; the Russians won.

Space-probe Luna 2 crash-landed into the moon at fatal speeds. 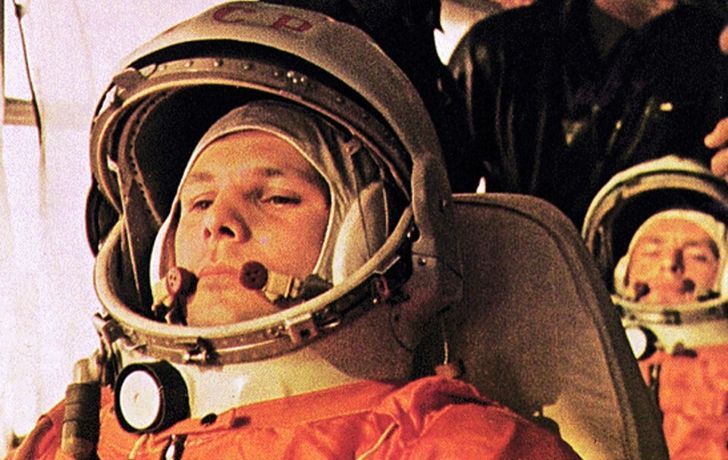 Traveling in Vostok 1 he completed one orbit of the earth, landing about two hours after launch.

Gagarin had to eject and use a parachute to land as the craft was designed to crash land.

John Glenn became the first US man to orbit the Earth aboard the Friendship 7.

John actually chose this name; officially the craft is called the Mercury-Atlas 6, for the mission Mercury and it being the 6th flight to use the faster Atlas rocket.

After her mission, she had a crater on the far side of the Moon is named after her.

Who could believe, after just sending men to the moon, NASA managed to successfully conduct the first Mars flyby with their Mariner 4 craft.

NASA firstly sent a robot spaceship called Surveyor 1, to make sure they could safely land.

Once Surveyor 1 landed it took photographs and sent them back to eagerly awaiting scientists who used them to visualize the terrain and work out a plan to land people on the moon safely.

On 20th July 1969, the famous “one small step” was taken by Neil Armstrong and Buzz Aldrin, and the first words were spoken “the Eagle has landed”.

This iconic phrase confirmed them as the first men on the moon.

Apollo 13 on 13th April 1970, the second day of its trip to the moon, suffered a wiring fault causing an explosion.

Using what was on board, NASA and the astronauts on board made repairs to bring the damaged craft back to Earth.

This saw the first use of the Lunar Rover, an electric vehicle with a top speed of 8 mph (13 kph), to explore the moon on the fourth, fifth and sixth Apollo missions.

The rover took Boeing 17 months to design and develop.

The first ever space station was launched in 1971, the Russian Salyut 1, and was launched from an unmanned rocket.

One part was to stay in orbit for the whole year sending pictures back to earth and the other was to land and explore Mars’ surface.

It was destroyed when a parachute failed.

The US launched their Voyager 1 deep space probe.

Voyager 1, on 17th February 1998, became the most distant human-made object in space after it passed the previous title holder; Pioneer 10.

From 12th April 1981 saw the idea of reusable space crafts, prior to this they we’re a one-hit wonder.

The Space Shuttle was designed to lower costs and could be used up to 100 times.

The first craft to start the Space Shuttle era was called Columbia.

All seven astronauts were killed.

After this tragedy, all shuttles were grounded for almost three years.

It was built in sections, taking 10 years, with each bit rocket-launched and combined in orbit.

In 2001 it was destroyed on its descent to earth. The ISS or International Space station also started construction in this year designed for research and space exploration.

The final major module of the ISS didn’t arrive until 2010.

The shuttle Discovery was launched to deploy the Hubble Space Telescope into Earth’s Orbit.

The telescope’s able to lock onto a target without moving to about the width of a human hair seen a mile away, or more scientifically, more than 7/1000th of an arcsecond.

In 1989, Helen Sharman won a competition to become the first British astronaut in space, she previously worked for Mars Bar.

After 18 months of harsh training, she joined a Russian mission to the MIR space station.

After all their problems, the US and Russia finally start working together or at least in space terms they were.

This year saw the US shuttle Atlantis dock to the Russian MIR space station.

The first look at mars occurred when Sojourner, A U.S rover, travels onto Mars to explore the planets geology.

In 2000 the first permanent crew inhabited the International Space Station (ISS), and have been there ever since.

On the 28th April 2001 US millionaire Dennis Tito spent around $20,000,000 and had 900 hours of training to be the first space tourist for a ride in a Russian Soyuz spacecraft.

He spent one week in orbit and of this time he spent most visiting the ISS.

This symbolized the hopes for space travel, for it to become a normal venture one day for everyone.

An adaptation of this technology is being used by Virgin Galactic, a company offering private tourist flights into space.

Even though in 2014 it crashed during testing, flights are still happening.

In this year, the European Space Agency launched their Rosetta probe hoping to reach Comet 67P/Churyumov–Gerasimenko.

SpaceX, a private company who built a craft to replace the newly retired Space Shuttle, became the first to launch a privately funded liquid-fueled rocket into Orbit, the Falcon 1.

These rockets are used to launch their Dragon capsule, a remote controlled capsule that takes supplies to the ISS.

The U.S Messenger mission to Mercury, launched in 2004, made its journey successfully traveling 48 million miles (77 million km), to begin its yearlong orbit of the mysterious planet.

The device is built to study astronomical objects with an angular resolution a few millionths of an arcsecond.

A major moment for commercial space travel started on 22nd May, SpaceX launched another Dragon C2+ powered by their Falcon 9 rocket to deliver a resupplying capsule to the ISS.

The capsule was caught by the ISS’s robotic arm and docked for nearly six days while astronauts removed cargo and loaded that destined for Earth, a trip it made with no real complications.

NASA’s Curiosity rover, a piece of equipment the size of a car, landed on Mars on August 6th.

It’s the largest and most advanced rover ever to land on the red planet.

On August 25th, Voyager 1, launched in the late ‘70s, became the first man-made spacecraft to cross into interstellar space.

Whilst on the comet, the lander sent data and high-resolution images from the Comet’s surface back to earth including 490-foot cliffs and house-sized boulders.

The Philae lander made a soft landing on November 12th after a perilous 7 hour descent.

Harpoons designed to attach to the comet failed, and the lander bounced twice before landing successfully.

On March 6th, NASA’s Dawn spacecraft entered an orbit around a dwarf planet Ceres, the largest object in the asteroid belt between Mars and Jupiter.

It passes, during its closest approach, only 7,750 miles from the surface and took high-resolution photos of Pluto and Charon, the largest moon.

Pluto is said to be about 50 miles larger than thought.

Space travel has for so many people mesmerized them from a very young age, myself included, and as this list has shown, there is always something new to discover!

We have barely scratched the surface, and yet every year we learn or launch something new with the dream of reaching some unknown bit of the universe.

To travel to the furthest edge man can reach will always be the aim.

To unearth the secrets hidden, to find life or anything that’s interesting and bewildering drives some of the best minds in the world every day.